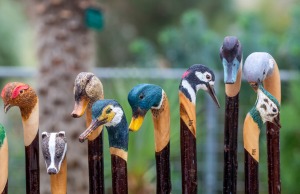 Dad’s aluminum cane is covered with blue-and-white flowers.  Its use around the house is no longer optional.  I thought he might like a more “manly” or “classy” cane, and suggested we procure a genteel wood cane.  “I don’t think so,” he declined.  Later in the evening he explained, “In my own mind, a wooden cane embodies permanence, and I am not ready for this to be permanent.”  I suddenly understood, and apologized, not having meant to suggest his permanent need, only the enjoyment of something refined.  Thus esteemed, he acknowledged that he is not likely to turn back the clock and not need his cane.  I admire his courage to look the future in the face, to stare hard at its reality.  I admire his long fight for a flourishing life.  His fighting spirit has not dimmed.  He will win the prize—indeed, has already won.

(Image by julianuc from Pixabay.)