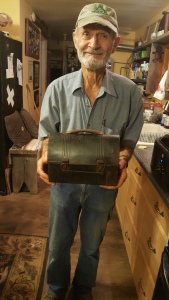 When Harvey turned 80, I gave him an antique workman’s lunch box, with oil rubbed into the rust—he adores antiques, and has a knack for turning junk into treasure. In the lunch box I included a homemade card with flower petals and leaves, and on the cardstock insert I wrote in my best longhand a celebratory message to my dear friend, Harvey, the hero of Rabbit Lane: Memoir of a Country Road and a one-time tanner and rendezvous mountain man who wears quietly the name Many Feathers bestowed by Goshute and Navajo chiefs.  A therapist once told me that emotional writing should be done longhand, accessing distinct brain quadrants than when typing, so I write in careful cursive my personal messages and in my journal.  In solidarity with my son, Brian, I purchased from Noodlers Inc. a whorled resin fountain pen named Ahab for its whale-shaped clip, and filled its cartridge with a blend of ink called Black Australian Rose.  But the mix was off in my ink batch, more of a cherry red than a red-and-black.  But I had bought it, so I was going to use it, and began signing official city documents in bright red ink.  “Signed in blood,” I joked rather lamely, a tad embarrassed for the bright resemblance.  The ink even bled through the cheap copy paper.  I thought to darken the red with a few drops of Moon Dust, and now the ink really does look like fresh blood instead of cherry juice, though I am enjoying signing in blood.  My message to Harvey in his 85th birthday card was written in this ink-blood.  When I came home from work on his birthday, I found a box from him on my desk.  Before opening it, Mom wanted to show me the five new grab bars in the bathrooms, the most important of which was just inside the master shower door, there anchored securely now to help Dad step over the deep tiled lip of the shower.  He acknowledged that shower ingress and egress had been precarious with him grasping the soap dish for lack of a bar.  Now the simple act of showering will be far safer and more enjoyable.  And with a doctor’s order we paid no sales tax.  Mom was happy with the installer, Austin, who was so careful and thorough and kind, and upon inspection I, too, was satisfied.  Retrieving Harvey’s box—how characteristic of the diminutive man to send me a gift on his birthday—I found inside his antique lunch box, for he had moved out after losing his third wife, and had no room for antiques in the bedroom of his daughter’s house, and did not how long he would be around anyway, and knew I would appreciate it more than anyone else in the world.

(Pictured above: Harvey on his 80th birthday with the antique lunch box.) 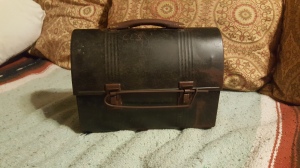 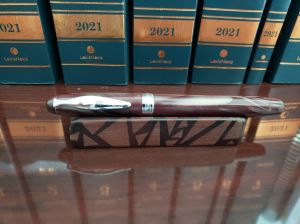 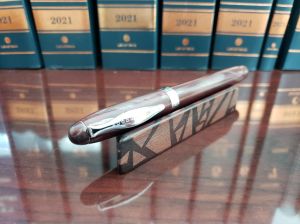 My Ahab fountain pen resting on a pen bed made by Brian.  See Brian’s YouTube channel “Down the Breather Hole” for fun fountain pen photos and videos. 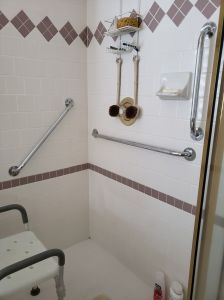 The new grab bars are in! 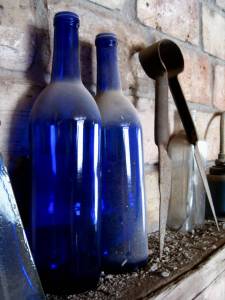 Areas of my ramshackle chicken coop are filled and covered with odd-and-end antiques.  I don’t buy them; they just seem to find me, in ditches, from neighbors and friends, at thrift stores.  I love them for their shape, color, and design.  More deeply, they speak to me of people and times long faded.  My book Rabbit Lane: Memoir of a Country Road is partly about the voices of the peoples and cultures that have died, giving way to the young and new.  The young and the new, however, find much of their substance in the past, whether they care to acknowledge it or not.  When I want to feel the voices, I walk on Rabbit Lane, or retreat to roost in my coop.  (See Chapter 15: Of Foxes and Hens for a description of how my chicken coop was built.)  This poem is about my chicken coop antiques and the voices that still whisper.

I have surrounded myself
with old things
that gather dust to cover rust.

I bring them inside walls
of bricks and unplaned planks
and windows of rainbow leaded glass
that once walled and windowed others’
houses and living rooms and bedrooms and kitchens,
and sit with them.

Filigree voices whisper
the virtues of old ways,
without judgment of me
or my time or my ways,
in gratitude for not forgetting
altogether.  I prefer their voices
to the bickering blogs
and testy tweety texts
of now.  They tell me they were
practical get-it-done devices
with no axe to grind or soul to skewer.

Brown-iron horseshoes open upward
to catch the luck, nails bent and clinging.
Vestiges of sky-blue on the rickety bench
I sit upon.