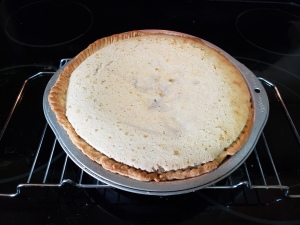 I wanted to make a nice dessert for Dad, and settled on a cream cheese tart.  I added fresh guava puree to exotify the pie, and sweetened the filling with Splenda.  I have become proficient at making French tart shells (pie crusts) from Julia Child’s cookbook Mastering the Art of French Cooking.   Dad sat at the island watching me prepare the dough.  “Don’t mix it too much,” he interjected.  I think you mixed it too much.  It needs to be ice cold and barely blended.”  I paid no heed, and placed the wax-paper-wrapped balls of dough in the fridge to chill.  After a few hours, I rolled the dough out and shaped the shell in the spring-form pan.  When I first starting baking, I pressed into the shell a sheet of aluminum foil and poured in a pound of dry black beans, to keep the bottom from bubbling up.  The beans are a cheap but effective substitute for ceramic baking beads, which I only recently bought.  Sitting in a yogurt container, they looked just like Holland mints, round and white.  Dad suddenly picked up a ceramic bead and plopped it into his mouth, thinking it was a mint.  Before I could articulate gentle words, I blurted, “Uh uh uh!” like one would chide a child with its hand in the cookie jar.  I did not mean to treat him like an errant child, but out of instinctual fear I did what I needed to do to stop him before he crunched on the glass bead and broke a took, or swallowed the bead.  He quickly spit it out, and neither of us looked at the other or said a word.  I did not want to shame him anymore than I already had with my tut-tut, and he did not want to acknowledge his gaffe.  We pretended nothing happened.  But later, when the pie came out of the oven looking beautiful, he confessed, as if I hadn’t known, “I almost ate one of those white glass beads.  I thought it was a mint!”  The beads removed, and the guava cream cheese filling poured in to bake, the tart tasted wonderfully delicious.