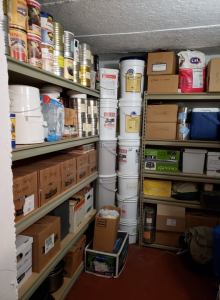 For over a century the leaders of my church have urged members to prepare for times of future trouble by saving a supply of food for at least one year, which we call “food storage.”  Not out of a sense of doom so much as of prudence and preparedness and the principle of self-reliance.  Frequent earthquakes, forest fires, hurricanes, and a pandemic have proven repeatedly the wisdom in this counsel.  Growing up in New Jersey, semi-trucks unloaded whole pallets piled with sacks of wheat and beans and dried milk in my driveway.  Us kids helped stack them in the garage, and members of congregation came to pick up what they had ordered.  A large room in our basement was filled with hundreds of 50-pound sacks of this and that, which we carried down the narrow stairwell one sack at a time.  Mom mixed milk in the blender at least once a day, and I actually liked it.  I do not recall having milk from a jug until after I graduated from high school.  And most winter mornings Mom ladled hot whole wheat cereal made from the wheat she ground the week before.  When Mom and Dad retired 20 years ago, they gave their food storage to fellow church members and moved to Utah, where they began again.  In recent Church conferences, leaders have again exhorted members to have a supply of stored food. With these exhortations, Dad indicated we had better heed the prophetic counsel and make sure their food storage was in order, and he asked me to prepare an inventory.  The process took me several hours of moving heavy boxes and cans, writing down items and quantities, container sizes and dates, then preparing a spreadsheet.  We were all impressed with what they had built up since their retirement, including 20 five-gallon buckets of hard white wheat and numerous #10 cans of powdered milk, potato pearls, rice, macaroni, freeze-dried fruit, split peas, dried beans, rolled oats, sugar, salt, hot cocoa, and many other foodstuffs.  This time they had included not just foods that would keep them alive in an extended emergency, but foods they would actually enjoy.  The inventory complete, our next task is to counsel about what is missing, and then to fill the gaps.