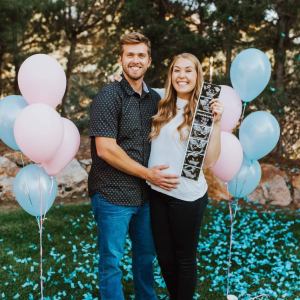 I had never heard of a “gender reveal” before, and I confess my first involuntary horrid absurd notion was of holding aloft a naked infant for the invited guests to gawk at. Instead, I learned, a gender reveal is a party at which the soon-to-be parents and their guests learn from a trusted person the sex of the coming child, followed by balloons and confetti and thick-frosted cake, colored blue or pink, boy or girl.  At John’s and Alleigh’s invitation, family and friends from Utah and Idaho gathered to Mom’s and Dad’s house for the celebration, happy to see each other, pumping hands and exchanging embraces, catching up on news and activities, eating chicken salad croissants, everyone eager for cupcakes with swirled pink and blue icing.  Mom and Dad added little cups of deluxe mixed nuts and candy corn.  We played cornhole, the always popular bean bag toss game.  Then it was time for the revelation (or is it “the reveal”?).  John and Alleigh each grasped a cardboard cannon, cameras whirring.  On “3!” they pulled the cannon strings and out exploded clouds of blue confetti—and then the whoops and screams of delight.  Their first child will be a boy!  His two-year-old cousin, Lila, gathered up little fists-full of confetti and announced, “fireworks!”  They had been equally contended with the thought of either sex.  Their exuberance was not over the baby’s gender, but over the ever-more-real fact that their baby is coming, soon—the  happiest of all possible news. 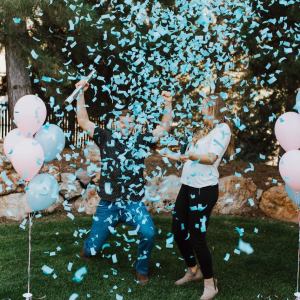 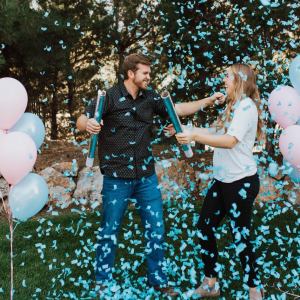