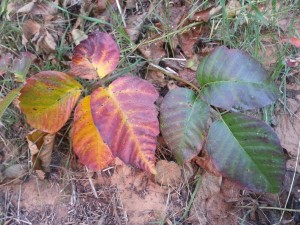 Upon moving to our New Jersey home in 1971, my father spent a Saturday eradicating huge vines and stands of poison ivy from our trees and yard.  He wore gloves, long pants, and a long-sleeved shirt, but the poison ivy dust and oils pierced his clothing and infiltrated his lungs.  His reward for his effort was several days in the hospital with severe rashes and swelling.  I learned vicariously the power of poison ivy. 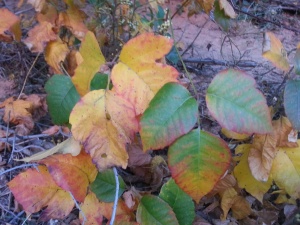 I rarely encounter poison ivy in arid Utah.  But I discovered lush poison ivy growth in Negro Bill Canyon, named after William Granstaff, an African-American who settled near Moab, Utah in 1877.

A 4.5-mile BLM trail follows a stream up the narrow canyon to Morning Glory Bridge, with a stunning 243-foot span.  The stream gurgles out from cracks in the sandstone cliff behind the bridge.

This is a favorite hike of mine for trickling water, vividly-colored wildflowers, aromatic sage, and dense greenery set against towering patina-stained red rock cliffs, and eleven stream crossings. 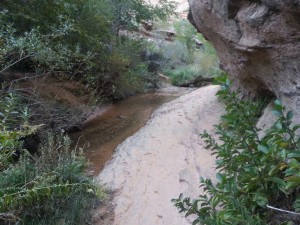 And poison ivy is everywhere.  The characteristic shining green in these Negro Bill Canyon photographs is yielding to the reds and yellows of fall.  Beautiful, to be sure, but don’t touch. 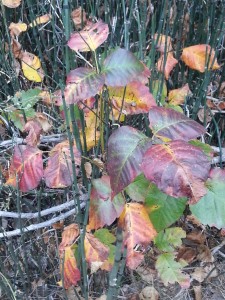 After being away from eastern forests for so long, I thrilled to be walking through the forest again, and was even glad to see the poison ivy, thus prompting this poem.  Can you guess why I described poison ivy as being faithful or a friend?  Leave a comment if you have an idea.

Hello, poison ivy, my faithful friend.
I have missed your glistening green.
My respect is rooted in recollection.