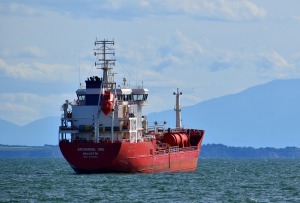 “You know, that reminds me of something strange….”  Dad worked in the international legal department of Johnson & Johnson from 1965 through 1998.  His responsibilities included knowing what products could and could not be shipped to and from many countries, from Columbia to China, Brazil to Scotland, Tobago to Iran.  Janssen Pharmaceuticals, a J&J subsidiary in Belgium, produced chemicals used in the manufacture of medicines.  Sales of these chemicals were strictly regulated by the company, and by U.S. law, because they could be coopted to make chemical weapons.  J&J took great care to make sure Janssen’s chemical purchasers were bona fide pharmaceutical companies.  Seated at his desk one day, Dad received a telephone call from a man who said, “Is this Mr. Baker?  I am CIA Agent [John Doe].  We have learned that the Syrian government, through a dummy pharmaceutical company, has purchased chemicals from your Janssen affiliate.  The chemicals have been loaded onto a ship in the port of Antwerp, bound today for Syria.  We are very concerned about the Syrians getting their hands on these chemicals.  The chemicals are aboard ship, so the United States has no jurisdiction.  Is there anything you can do to prevent them leaving Belgium?  Here is the ship ID.”  Dad stammered that he would try.  “By the way, this conversation never happened,” the agent averred.  Dad phoned the general counsel of Janssen, asking if Janssen had sold certain chemicals and if they had been delivered to a particular ship.  “Yes, and yes,” came the answer.  Having corroborated the operative’s bona fides, Dad explained the suddenly surreal situation.  “What do you want me to do?” the Belgian asked.  Dad instructed him to go at once to the port of Antwerp and to the board the ship—and to take ten armed men with him, as a show of authority.  Dad instructed him to demand the release of the chemicals.  The captain balked, saying the chemicals had been bought and paid for—they no longer belonged to Janssen—and the shipping had also been paid.  Dad ordered his counterpart to explain to the ship captain that the chemicals had been purchased illegally by the Syrian government through a dummy corporation, that it would be a federal U.S. crime to allow the chemical delivery to Syria, and that he had ten armed men on board to make sure a federal crime was not committed.  Only then did the captain agree.  The chemicals were unloaded from the ship and returned to Janssen, where they were destroyed.  The next day, Dad received another phone call from the CIA operative, who said simply, “Nicely done, Mr. Baker.”  He then suggested that he and Dad made a good team, and offered Dad a role in future operations.  Incredulous, Dad declined, saying he had intervened on behalf of his company, but he had no interest in being a spy.  Hanging up the phone, Dad reflected on how strange and dangerous the Antwerp operation had been.  Any number of things could have gone terribly wrong (think: piracy, gun battles, toxic chemical spills, hostages).  But he had done what needed to be done: he kept his company out of trouble, and he prevented a rogue country from obtaining the raw materials for weapons of mass destruction.

(Image by Thanasis Papazacharias from Pixabay.)