Mom’s and Dad’s retirement home is located near the Dimple Dell natural recreational area, a series of deep sandy ravines and canyons carved by rainwater rivulets and a trickling stream. Trails winds their way through the bottoms, beside the stream.  I have attempted to ride my mountain bike on the trails, but always become mired in deep sand or get bucked by river cobbles.  Still a runner when he retired, Dad enjoyed jogging a six-mile course every day on the river bottom trails.  During one run, Dad saw a gorgeously burnished red fox trotting along the trail in front of him, looking back over her shoulder at him as he ran.  Dad thought to try an experiment.  He stopped jogging.  The fox stopped trotting, and they looked at each other for a few moments.  Dad sat down.  The fox, in turn, sat, and from a distance of about ten feet, Dad began talking to the fox.  “You are such a nice, beautiful fox,” he complemented.  “You have a very bushy tail.”  The fox simply gazed back at Dad as he prattled on.  As Dad stood to resume his trail run, the fox resumed his trot along the trail.  Soon the fox veered sharply off the trail and climbed a hill.  Perhaps the fox’s den is nearby, Dad wondered.  He began thinking about what the fox had available to eat in the Dell, and whether the fox might like some chicken from the grocery store.  After his run, Dad went to Smith’s to buy the chicken.  He selected a raw chicken, but questioned whether the fox might prefer a cooked chicken.  So, he bought both a raw chicken and a cooked rotisserie chicken, took them into the Dell, retraced his steps, and climbed the hill where he had seen the fox climb.  He found the fox’s den, and placed the chickens about 15 feet away, so the fox would not suspect a trap.  Dad returned the next day on another run, and the chickens, of course, were gone.  He knew he could not, and probably should not, provide many chickens to the wild fox, but he hoped his gift had been enjoyed.  He, in turn, had very much enjoyed the gift of his friendly encounter with the wild red fox.

(Above image by Here and now from Pixabay.) 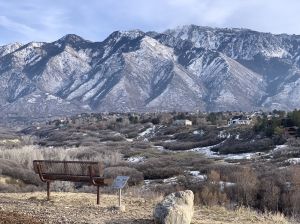 Dimple Dell against the Wasatch Mountains.  (Photo from AllTrails.)