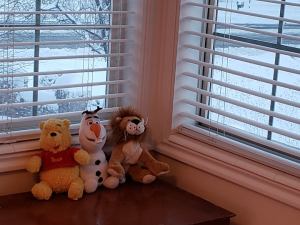 Near midnight, I lay in bed watching the snow fall outside the window, lit up by the strings of white lights on the eves.  Just inside, Olaf, Winnie the Pooh, and Little Growler also watched the pretty sight.  Morning brought the realization of the night’s big snow fall.  A week before, three inches had settled.  Before Dad and I got to the task of shoveling, our neighbor Terry plowed the snow off our driveway and sidewalks with his snow blower.  But this snow fall was a full 12 inches of heavy new powder.  I had not used Dad’s new snow blower before, but the pictorial instructions on the machine showed me how to prime, choke, and start the engine.  The beast of a machine ground eagerly into the drifts, throwing a twenty-foot comet tail.  My affection for the machine grew as it helped me with the enormous job, and I began thinking of it, perhaps appropriate to the season, as my Friendly Beast.  The Beast and I sliced off a foot-width of snow at a time, passing back and forth a hundred times.  The snow near the street sat on inches of slush, which stuck in the tines and snow chute.  Twenty years ago, I met an elderly church volunteer who had severed his fingers cleaning out a clogged snow chute.  With the memory of his bandaged stubs still fresh, I used a broom handle to ream out the chute, then plowed on.  Just then Kevin’s car slid and stuck in the unplowed ruts in the road.  “I’m stuck!” he shouted to me from his open window.  I brought two shovels, and we cleared the ice from behind the tires.  I had him back up slowly, careful not to spin the wheels, and he then was able to roll forward.  He waved gratefully as he drove away, and I went back to the Beast.  After two hours, the Beast and I finally finished the job.  Dad came out, all bundled up, to wave and watch, then we went into the house for mugs of mint truffle hot cocoa mix. 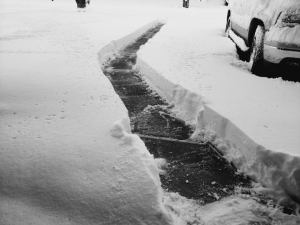 3 thoughts on “Courage at Twilight: The Friendly Beast”