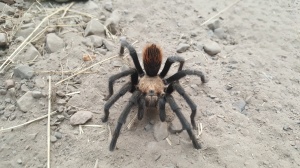 While Dad was reading late one night, a spider emerged from under the sofa, walked slowly toward him, stopped, and stood tall on its front legs, looking up at him, as if challenging, Here I am. What are you going to do about it?   Dad knew there was nothing he could do about it—he could never heave himself out of his recliner and catch the spider before it dodged away.  Victorious, the spider sauntered nonchalantly back to its hideout under the sofa.  A couple of weeks later, another spider scampered across the kitchen floor, near where Dad was standing at the sink scrubbing a pot.  This spider, too, looked up at him with a challenge, but Dad simply stomped on it.  Dad felt bad, preferring to let these fascinating creatures live—but not in the house.  When Dad was a teenager, his father Owen staked out a 40-acre mining claim in the Nevada desert, and occasionally took his two sons to camp in the desert and work the claim.  They imagined striking it rich with gold as they dug their holes in the hill.  Owen had welded steel plates to the old truck’s undercarriage, allowing him to bowl through sage brush undamaged.  After making camp one afternoon on a low flat sandy arroyo, with blue skies overhead, they began to hear a strange rumbling, and looked up to see a wall of muddy water rushing down the dry stream bed.  They lurched from their bed rolls and made it with the donkey to higher ground just in time to see their camp entirely washed away.  The torrent ended as quickly as it began, and the boys set off down the muddy channel to recover what gear they could find.  Here was the stove, and the aluminum plates.  And there was the pistol barrel sticking up from the mud and sand.  Dad came to a narrow gorge across which a stout plank had once been placed.  He was halfway across when an enormous tarantula climbed on the other end of the plank and started to walk toward him.  They both stopped and looked at each other for a moment.  “I think the tarantula was asking me, Are you going to let me cross, or what?  Dad back up and off the plank, and the tarantula recommenced its slow crossing.  He watched the tarantula amble off into the desert, and then crossed the gully in the other direction.  Since the two recent faceoffs in the house, Mom brought in pest control to spray for spiders—they simply do not belong in the house.  But that tarantula was king of the dessert.

(I encountered this migrating tarantula while mountain biking in Settlement Canyon, Tooele, Utah.)