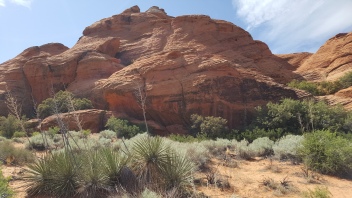 We drove to the park.  So did he.   Or perhaps someone drove him—that is more likely, perhaps.  We drove to the Loops at Lovers Lane Park.  Three of us, the youngest and fittest, were there to walk and jog the loose lime-finds path.  Me, the oldest and least fit and least interested in being fit, was there to walk slowly, so I could see the sassafras leaves and the parasitic threads of poison ivy vines sucking on the sassafras and maple and beech and tulip polar trunks.  I wished it were spring so I could gaze upward at the high-canopy blossoms of the tulip poplar, tight green buds that burst open into creamcicle orange blossoms two inches tall, then after weeks sending spinning and twirling so many single-finned seeds to the ground.  I walked slowly to see what there was to see, burning calories being the matter of least interest despite intrinsic merits.  And he walked just to walk, barely, because he could, barely, and because he needed to, desperately, he needed to hang on to that lifelong ambulation of which he was capable at only eight months, can you believe that, he must have been a special gifted child, and he needed to hang on because once he stopped there would be no restarting, no do-over, no winding back the clock for his deteriorating frame and structure and rough-jointed hips and knees and ankles, no casual swing in the shoulder sockets, no matter how useful and compensatory the chestnut wood cane he leaned on heavily now.  While I walked along looking at my leaves and vines and craning my neck ever further to glimpse his progress, I saw he made slow progress, planting first the cane—even the cane stepped slowly, delicately, deliberately—bringing one knee up and out for the foot to fall one foot farther on, scraping the shoe sole of his other leg-foot along the pocked spalling mildew-stained sidewalk, while one shoulder moved the arm and hand and cane and the other shoulder merely suspended an utter limpness in that limb, a limb that only hung, useless except as a paperweight, and a counterweight, and to maintain a semblance of dignity at still having two arms, symmetrical in form if not in function.  As my children finished their two miles, I finished one respectable loop, and my friend—I call him friend because I felt tenderly toward him, and because I admired his considerable pluck just to be there despite the seeming futility of his slow shuffle, and because I wanted a friend, and because he caused me to think of my own aging deteriorating father whom I admire and about whom I think tenderly, remembering his twelve marathons as I watch him lunge, already breathless, from his corduroy-cloth easy chair to the kitchen table for his toast and jam and his glucose prick-and-read and for his hypertension and prostate and glaucoma and diuretic and blood thinning pills, and for his warning I’m going downhill fast, Rog; it’s a slippery slope, from which I remembered we are all going, and going fast, down a steep or shallow hill—my friend had shuffled and dragged himself across fifty feet.  But he had done it!  He had walked his fifty feet, and had turned to slide and caper the return fifty feet, a slow-motion quiet joyful exultant exhausted slow-dance showing his satisfaction at having done it, again, at having extended his step and stride yet one more day, one more, every day.  And to my proud amazement, he trudged past his car to the other end of the sidewalk, twenty feet more, from which he would need to return because I saw no one with him on the walks or in the nearby car ready to come to his rescue.  We turned the baby loose from her jogger-stroller to chase her feet on the soccer lawn, to steal our errant frisbee, and to dribble her pink ball across the lumpy grass with remarkable dexterity and direction and precision for one barely one, and of course she saw the baby swings and the babies and toddled over to the playground where she swung toward and away and toward, all teeth and smiles and giggles as we goo-goo-ed at her, so proud, so admiring.  And while we were so engaged, my friend made his way to his car, the one with the handicapped sign on the rear view mirror, a blue sign with a white wheelchair, the wheelchair that will someday capture him like a benevolent but resolute best-friend who knows what you need and is determined to bring it to you.  He sat on the passenger seat with his legs stretched out the door, his surgeon’s mask stretched down to cover his chin, and I wanted to say something cheerful and clever but managed only a lame “You’re doing it!” combined with a nerdy wave and smile.  But he smiled broadly back, a smile as slow as his stagger, but bright and cheerful and friendly and perfect, and he said, slowly, and with a toothy smile, a quiet Thank you, because he knew he had made it another day, had moved, had walked, had worked, he knew he had done it, and because he knew I recognized and understood and admired both his effort and his success, and because he knew we were friends, who did not know each other’s names, and who would never see each other again, though these last two things did not matter.

Roger Evans Baker is a municipal attorney, homebody poet and essayist, and amateur naturalist.  Roger is the author of Rabbit Lane: Memoir of a Country Road and A Time and A Season.  Rabbit Lane tells the true life story of an obscure farm road and its power to transform the human spirit.  A Time and A Season gathers Roger’s poems from 2015-2020, together with the stories of their births.  The books are available in print and for Kindle at Amazon.  See Rabbit Lane reviewed in Words and Pictures.