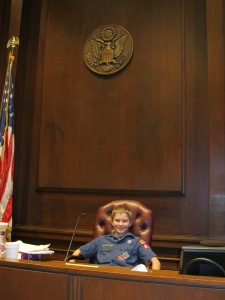 No matter how compelling the evidence and the argument, the fate of any case, and the people involved, is in the hands of the judge (or the whims of the jury).  Outcomes are rarely predictable.  What do you think about this case?  Which way should the scales of justice tip?  Well, let’s check in on Judge Stone for this final scene of Chocolate.

JUDGE STONE. Good. I mean, very well. Mr. Butcher, do you have a closing statement, or do you submit it to the judgment of the Court?

MR. BUTCHER. (catching the hint, but letting go with difficulty) Well, I have saved by most eloquent argument for closing, Your Honor, but I’ll submit it if Your Honor wishes.

JUDGE STONE. I do wish it. Mr. Sullivan, what do you have to say on behalf of your client?

MR. SULLIVAN. (grumbling, becoming agitated) Well, Your Honor, Mayam, it’s just as I said before. It’s all lies. And I’ll tell you somethin’ else. It’s more than just lies. It’s downright evil: the government cavortin’ with liars and deceivers to put an innocent man behind bars and shame him forever. What’s this country comin’ to? I’m tellin’ you, justice means nothin’ in the face of such conspiracy! I trust that a judge as intelligent and discerning as Yourself can see that, can see through the trickster’s smoke and mirrors, and find it within your heart to let an innocent man go free.

MR. BUTCHER. (indignant) Conspiracy shmiracy, I say. He’s paranoid! I’ve never heard a more ridiculous story than the one this rascal tried to pawn to this discerning Court. Even I saw through it, I mean, well, you know what I mean. The rogue is guilty.

MR. SULLIVAN. (aside to Butcher) It’s a good thing for you this is a public defender case, Butcher, or I’d have your hide. You just watch your step with my high-paying clients, (under his breath) if I ever get any.

JUDGE STONE. (condescendingly) Well, then. I am prepared to pronounce my judgment. Mr. Bull, I have no doubt that whilst in the course of drunken tirade you did indeed manifest a dangerous weapon, i.e., a loaded firearm, in a threatening manner, thereby instilling terror in the heart of your victim. Your, hmm, defense notwithstanding, I find you guilty as charged. I also find you guilty of discharging a gun within the corporate limits of Sherman City, of public intoxication, of disorderly conduct, and of otherwise disturbing the peace.

MR. SULLIVAN. (outraged) You can’t do that Your Honor! Those crimes weren’t even charged!

JUDGE STONE. (incensed at being openly challenged) I’m the judge, this is my court, and I’ll do as I please. Do you hear! And I find that Mr. Bull did commit all of the above-enumerated crimes. (taking a moment to regain her dignified composure) I shall now pronounce sentence. For each crime the defendant shall pay a fine of $100 dollars, for a total of $500, plus a 200% surcharge to go the State to fund victim reparation programs, school non-violence programs, gun safety education programs, and judicial retirement programs. The total is, let’s see, $1,500. For each crime the defendant shall serve six months, each sentence consecutive (that means back-to-back, Mr. Bull). That’s two years. (long pause, then sounding pleased with her leniency) But I’ll suspend all the jail time upon full payment of the fine and completion of one-thousand hours of community service at the nursing home, where I hope you’ll learn some compassion and some patience and some manners. Court is now adjourned! (the judge suddenly rises and moves toward her chambers)

MR. SULLIVAN. (furious, as the judge descends from the dais) Butcher, you scoundrel, you prejudiced the Judge with all your talk of barbarian and rogue and rascal!

MR. BUTCHER. (defensive) What about you and all your chocolate licking?

BAILIFF FLAPPER. (in sergeant’s mode again, his eyes fixed dutifully on the departing judge) All arise! The most Honorable Judge Marsha P. Stone has departed the judicial chair and this Court is now hereby adjourned!

JUDGE STONE. (rolling her eyes and smiling coquettishly over her shoulder as she enters her chambers) Really, Flapper!

[I sincerely hope that you have enjoyed my little play.]