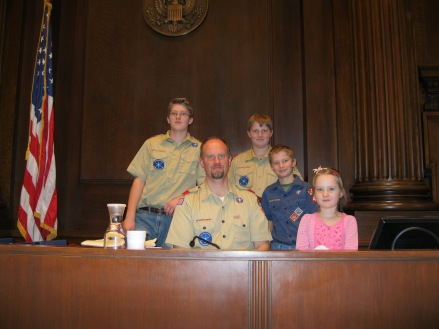 This scene pokes a little good-natured fun at the police officer caricature.  (I won’t mention coffee and donuts, a sore spot with my police officer friends.)  Lest I be misunderstood, I have the greatest respect for law enforcement, for who they are, for what they do, and for why they do it.  They bring order to society by maintaining the rule of law within the bounds of the law.  I know of no tougher, more dangerous, more stressful, less-appreciated, more underpaid profession.  I offer police officers my thanks, my admiration, and my respect.  Still, I have read modern police reports that actually used the phrase “dismounted my vehicle,” hearkening unwittingly to the days when deputy marshals dismounted their equine partners while patrolling 19th-century towns.  Now, let’s meet Officer Ketchum.

MR. BUTCHER. (with great expectations for triumph) Just one, Your Honor. The best for last. The State calls Officer Harold Ketchum to the stand. (Officer Ketchum, in full dress uniform, takes his seat at the witness stand) Are you or are you not a sworn, certified police officer with 15 years of experience with the renowned Sherman City Police Department?

MR. SULLIVAN. (affecting incredulity) What is this, an awards ceremony? Your Honor, Mayam, he can’t do that. He packs 18 questions into one and bulldozes it all down the witness’ gullet.

MR. BUTCHER. Now, then, Officer. Tell us what happened on July 7th.

MR. SULLIVAN. (in disbelief) I can’t believe this! H-e-l-l-o! Has anyone ever heard of hearsay? Where is the lady that’s supposed to be so frightened anyway?

MR. BUTCHER. (accusingly) She’s at your client’s house, where she refused to accept a subpoena because she’s too afraid to show up.

JUDGE STONE. (flaring) Oh, shut up, both of you! Now move it along Butcher.

MR. BUTCHER. (moving it along) Officer Ketchum, did you ever find this man, Victor Bull, at the scene of the crime?

OFFICER KETCHUM. Yes, Sir, I did.

MR. BUTCHER. (after a pause, annoyed) Well, tell me about it. What and where and when and how?

OFFICER KETCHUM. Very well, sir. I proceeded to investigate the house and the house premises. Finding no sign of the defendant, I proceeded to search again the yard area. Upon shining my police issue flashlight under the rotten redwood deck, I observed the person of the defendant hiding beneath said deck, in a horizontal position, as if sleeping. I instructed him to exit his location. He remained motionless, as if sleeping. I repeated my instructions, and the defendant exited his location, but not without difficulty, requiring my firm assistance to stand and to ambulate to my police vehicle.

MR. BUTCHER. You mean he was drunk?

MR. SULLIVAN. Thank you kindly, Mayam. Now, Officer Ketchum. Fifteen years with the department, it is? Certified, are you? Fully trained, are you?

MR. SULLIVAN. (innocently) Then tell me this. Just how many times have you been trained in locating suspects beneath rotten redwood decks by flashlight light?

MR. SULLIVAN. (with suspicion) I see. And how many times in your distinguished career have you apprehended persons who appeared to be sleeping beneath rotten redwood decks? None, I’ll wager.

OFFICER KETCHUM. Correct, sir, although I have apprehended numerous other suspects who were pretending to–

MR. SULLIVAN (all innocence lost, suspicion turns to combative confrontation) Just answer the questions I ask, Officer. I didn’t ask, Would you please volunteer to me whatever you would like. I asked a simple question, and you gave me a simple answer–no. So it’s fair to say that you have no direct training or experience in the apprehension of people sleeping under rotten redwood decks, with flashlight light at night, right?

OFFICER KETCHUM. I guess not, sir.

MR. SULLIVAN. Did my client have a gun in his possession?

MR. SULLIVAN. Did you search the premises for a gun?

OFFICER KETCHUM. No, sir. I saw no need once we had apprehended the–

MR. SULLIVAN. Thank you very much, Officer Ketchum. That will do. No further questions.

JUDGE STONE. Does the State rest?

MR. BUTCHER. (quite pleased with himself) We do, Your Honorable Honor.