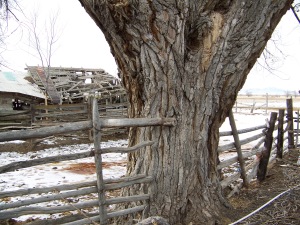 Dead and dying poplars stand along the ditch bank on Rabbit Lane, like sentries propped up against battles long ago lost and won.  Many branches, devoid of leaves, poke absently out and up like ten thousand fingers on stubby arms.  On the oldest, the only leaves huddle close to the trunk, near the base.  Finches and sparrows hop happily amidst the morass for some purpose unknown to me, or for no purpose.  Their nests lie hidden somewhere in dense bushes; no seeds or insects can be found in the spiky tree stubble.  But safety from cats and falcons the branches certainly provide.

Many of these soldiers that stood for so long have fallen, in their last battle, to the chainsaw.  The track-hoe needed to straddle both ditch banks in order to dredge the ditch, to clear the way for the pipe that will now encase the water forever, and the trees were in the way.  The water will still flow, but undrunk by the birds, unswum by the muskrats, uncluttered by watercress, and unheard and unseen by me. 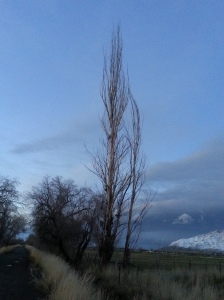 Certain trees sprout up spontaneously in Erda, most notably the Siberian Elm, but also the Boxelder, the Silver Maple, the Cottonwood, and the Russian Olive.  The elms, growing several feet each year, even with no water but the occasional scant rain, quickly reach the height of the power lines on Church Road, Erda Way, and other local roads.  The power company cannot countenance this conflict, and periodically appears with its boom trucks to cut the trees back.  The word “prune” would unduly dignify their work.  With little thought for the structural integrity of the trees, or for their aesthetic value as roadside trees, the company arborists slice away all interior limbs nearing the lines, leaving behind huge V-shaped gaps through which the lines pass unmolested. 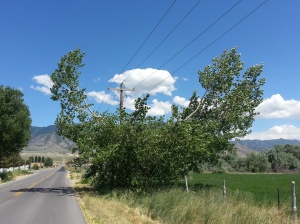 A tree slightly off-center from the power lines avoids the V-cut in favor of the total side slough, in which all limbs on one side of the tree are cut away.  The resulting trees, planted by prior generations of farmers or sprouting spontaneously in decades past, are both ugly and ridiculous in appearance and impotent in aesthetic quality.  Staring at the butchered trees, I wonder what holds them together, how the massive trunks do not split down the middle, away from the repulsive presence of the power lines.  Public complaints against this practice are met with the company’s stock answer: We have a franchise.  We’ll deal with the tree conflicts in whatever manner we see fit.  Which manner means cheap and easy.  Also, the company provides no advanced notice of its arrival on a given day to perform its rough, hasty operations.  The tall, rounded canopies become gaping Vs before one has a chance to utter one’s feeble protest. 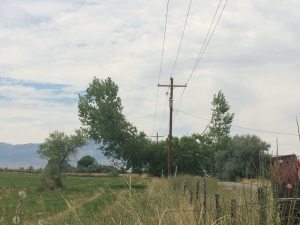 The property we purchased was devoid of vegetation but tall, wild grass and a lone old apple tree.  Just before the deer hunt during our first year in Erda, a woman stopped her car on Church Road by the apple tree and started picking its red delicious apples.  Angie called for me to come and see, which meant that I was to do something about it.

I waded through the tall grass toward the tree, greeted the woman, and stated politely, “Um, you’re picking apples from my apple tree.”

Surprised and a little embarrassed, she look up at me, then toward my house, and replied, “You own this land?”

“Yes,” I said patiently, “this is my land, that is my house, and this is my apple tree.”

She looked worriedly down at the paper shopping sac full of apples.  “What should I do with all of these apples that I picked?” she asked.  “We’re so used to picking apples off the old church tree to take on the hunt, it didn’t occur to me that someone else owned it now.”

Appreciative of Mayla’s humility, I was happy to respond, “You should keep those apples and pick more so that you can fill the bag.  Enjoy them, and good luck on the deer hunt.”

My response seemed to surprise her even more than my initial approach.  She thanked me, picked a few more apples, and drove away.  Mayla turned out to be a neighbor, married into a family of other neighbors with whom I would become close friends and who, in the coming years, would fill my empty sac many times over.

When we moved to Erda, the venerable apple tree was suffering from years of neglect, and badly needed pruning.  Suckers had grown ten feet or more straight up from the fruit-bearing branches.  The Utah State University extension literature said that, when dealing with a neglected tree, it was unhealthy to prune more than one-third of the tree in any one year.  Pruning more than one-third of the tree would trigger a shock reaction, and the tree would redirect its energy away from producing fruit toward recovering from the aggressive pruning.  Following the pruning instructions, I cut off the small branches growing up from the lateral limbs, so that the branches and buds growing out and down would bear the fruit.  Still, I couldn’t resist climbing high in the tree and removing some of the excessive top growth.  I also removed some interior limbs that crowded the tree and made it nearly impossible to climb.  The children were happy to have a climbing tree, and called frequently to me from its highest branches, “Look at me, Daddy!”  The tree accepted my pruning without noticeable distress.

Like the children, I myself enjoyed the view from 20 feet up in the tree.  I could see for 12 miles from the blue-gray waters of the Great Salt Lake to the tops of the Oquirrh mountains near Tooele.  These views from the top of the old apple tree worked their way into one of the songs that came to me, slowly over the course of weeks and months, during my walks on Rabbit Lane. (See Rabbit Lane: Songs page, Wandering post.)

When I first approached the task of pruning the apple tree, it was so tall and choked that I could not reach the highest branches.  So I purchased a telescoping pruner with both pruning blades and saw blades at the end.  The pruning blades worked by pulling on a long rope that brought the blades against the branch being pruned.  Standing on a ten-foot step ladder with the pruner extended another 15 feet, I managed to reach the highest suckers and cut them off.  The strain on my back, neck, shoulders, arms, and legs from leaning against the ladder and pulling on the rope and craning my neck kept me from pruning for more than an hour at a time.

During my walks on Rabbit Lane after pruning the apple tree, I began to ponder the concept of pruning a tree’s growth so as to produce the tastiest, biggest, most accessible fruit.  Was there a principle here?  Certainly an agricultural principle.  But what about a human principle?  Of course, the principle of knowing people by their fruits, or deeds, is millennia old.  Was it through good pruning practices that people produced the best personal fruits?  I began to consider what traits, tendencies, and weaknesses I might prune from my own personality, to consider ways in which I had grown that did not produce the most pleasant fruit.  I began to perceive that my fruit was often shriveled and bitter, unpleasant to those with whom I shared myself.  I needed to prune my soul of anger, of jealously, of selfishness, of pride, of fear, of shame—of many other qualities that did not bring joy to those partaking of me.

Changing the human soul is not easy or quick.  I cannot prune my entire self-tree at once without harmful shock to my core systems, without failure.  Some branches I would not be able to reach by myself, and would need the assistance of trained self-tree therapists.  I would have to learn what tools were available for pruning, and learn how to use them.  I would have to take care not to leave torn branches, open wounds, dripping sap, or stripped bark.  And pruning for too long would leave me fatigued and in pain.  But I could identify one or two errant branches at a time and lop them off, beginning to make way for the sun to nourish the rest of the tree and begin to fill its fruit with swelling sweetness.  When those cuts healed, I could identify a few more branches ready for pruning.  With regular, enlightened pruning, my self-tree might someday become more shapely, and my fruit more sweet.  While this may seem cliché to some, it was a new insight to me.

Our experiment with goats was hard on the old apple tree.  Tiring of the wiry grass, and liking the smell and taste of the apple bark, they began to nibble at it.  One day they discovered that they could grasp a loose end of bark at the tree’s base between their teeth and gums and yank upwards, pulling off long strips of juicy bark.  In one day, within only a few minutes, they managed to strip nearly all the bark off the first four feet of the old tree’s trunk.  I ran to the tree and shooed the goats angrily away with sticks, painted the bare wood with black sealing pitch, and wrapped the trunk with old chain link fence.  But the damage had been irretrievably done.  The tree made a valiant effort the following Spring, putting out a few leaves and blossoms, but I am sad to say that the old apple tree died.  Though it wouldn’t help the tree, I decided I had had enough of the full-grown goats that seemed capable of jumping any fence, pushing their way through any hole, and stripping the bark off my fruit trees.  I gave them away.  Later, we brought home some baby pygmy goats: much sweeter creatures.