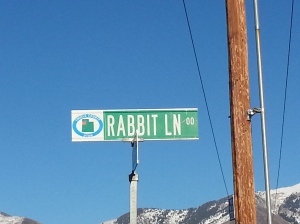 The weekend cowboy had neglected to secure the trailer gate as he drove down Church Road.  Arriving at Russell’s arena, he put his truck in park and hopped out, stopping stunned at the horror of what he saw behind.  His horse had slipped off the back of the open horse trailer, its head still tied to the trailer bars by the halter rope, and had been dragged on its haunches for half a mile down the road.  A long skid mark of hide and flesh and blood reached back down the road from where the terrified animal lay in agony.  The animal had lain bleeding until the vet arrived to put it down.  The children were very quiet that night.  The next morning, with the truck and trailer gone, the road as it passed our house was stained a rusty red.

Joe was reared in the old, grand clapboard house that stood until the late 1990s on the country road bearing the family name: Liddell Lane.  Born in 1923, Joe as a teenage boy delivered newspapers on horseback to Erda’s farmers six days a week, traveling 15-20 miles every day.  His rounds completed, he and his horse cantered home every evening by way of Rabbit Lane.  Water flowed freely in the adjacent ditch from the Isgreen wells.  One night, the sudden sound of a startled Muskrat diving from the ditch bank into the water in turn startled Joe’s horse.  From its quick canter, it stopped on a dime.  Joe’s inertia sent him flying over the horse’s head into the four-strand barbed wire fence on the other side of the lane.  He suffered lacerations on his forearm and thigh.  He unwound himself from the wire, remounted his horse, and trotted home.  The cuts healed, without stitches, leaving respectable scars, which he was glad to show us as we sat around the Sunday dinner table.  With no anesthesia, stitches may well have hurt worse than the barb cuts.

During the Great Depression, Joe trapped the Rabbit Lane muskrats and sold their pelts for $1.20 to $1.65 each, depending on the volatile market for such commodities.  This provided the family with a rare source of cash during hard times.  The family also harvested Watercress from the flowing ditch to flavor their salads and soups—slightly sweet and slightly bitter.  Many times I have been tempted to harvest the lush Watercress for my own meals, but refrained for fear of salmonella.

Dempsey’s property at the north end of Liddell Lane supports an assemblage of odd out buildings and pens.  He boasts imported Bull Frogs in his spring-fed pond, and he keeps bison, cattle, horses, chickens, ducks, geese, and one milk goat.  The poor mammy’s teats hang so heavy and low that she walks with difficulty, the teats tangling with her hind legs.

Nina, born in 1924, often traveled Rabbit Lane in her youth.  As she walked down Rabbit Lane, Jack Rabbits jumped out from the brush to run across the road and scurry about.  Her husband, Keith, and their sons hunted Jack Rabbit so that the family had meat on the dinner table.  Today, their family grazes hundreds of beef cattle on their sprawling Erda acres.  But in the days before big beef, Jack Rabbit was the staple meat, and Rabbit Lane had an abundance of them.  If the settlers had a cow, it was usually one milk cow.  In the days of her youth, frogs sang from the irrigation ponds and ditches and the soggy areas where springs trickled up in the fields.  Now the rabbits and frogs are all gone.

“I think it was DDT,” she guessed.

Nina’s son, Charley, attributes the disappearance of the animals to the loss of their habitat through urbanization.  The Tooele valley floor was once covered with Greasewood, ideal Jack Rabbit habitat.  Greasewood made way for grass pasture and cultivated farms.  The valley is dotted with natural springs, which the settlers diverted into ponds and control-released into irrigation ditches.  The ditches were often collocated with cedar post fence lines, where the native grasses grew tall, forming perfect habitat for Ring-necked Pheasants.  The grasses formed ideal year-round cover for pheasants, perfect for nesting, and protecting against Winter’s harshness, when heavy snows would bend the grasses over, forming insulating lodges.

“Me and the boys would catch our limits (and them some) every hunting season, sometimes 20 pheasants a day each,” Charley reported.

Mallard ducks throve in the ditches.  Although Erda remains a rural area in many respects, the spring-fed ponds and irrigation ditches that once proliferated have vanished in favor of the piped ditch, the pressurized irrigation system, and the rural home lot.  With them have gone most of the wildlife.  I have never seen a Jack Rabbit in Erda.

On a Sunday morning as I sat reading the word of God and enjoying the quiet, I was suddenly startled by the too-close reports of shotgun blasts.  Jumping to the living room window, I observed a hunter in camouflage standing in the tall grass not more than 150 feet from our house, his shotgun at the ready, following a pheasant as it flew past the house.  “Bang!” he fired again, practically pointing at the house.  I rushed out the front door and shouted, “What the hell do you think you’re doing?  You are way too close to our house, and you don’t have permission to hunt here!”  Not waiting for his answer, I hurried back inside to call the Sheriff.  I felt both angry and dumbstruck that this hunter would be so careless as to hunt this close to a house, even aiming toward the house at his bird.  Angie was furious.  The Sheriff’s deputy soon arrived, took my report, and had me sign the citation as the witness.  County ordinance prohibits hunting any closer than 600 feet from a building.  I noticed that the hunter was allowed to take his pheasant, and I never heard from the court. 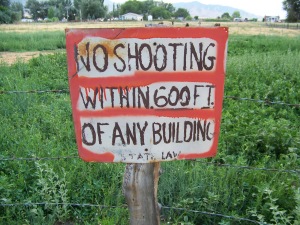 A few weeks later Charley shot a pheasant in his fields, from where it flew across Church Road and landed in the tall grass near our house.  Charley strode into the grass, with his shotgun on his shoulder, looking for the injured bird.  Angie, not knowing it was Charley, and with the memory of the reckless hunter still fresh, flew out the door shouting, “Hey!  Take your gun and get out of there, away from our house!  You’re too close!  There are children here!”

“It’s okay, Angie,” Charley chuckled.  “I shot the pheasant in my fields and it managed to fly over here somewhere.  I’m just looking.  I won’t do any shooting, I promise.”

Angie was too upset to recover her calm and chit-chat with the neighbor.  She just turned her back and stormed back into the house, leaving Charley wondering at her distress.

Charley and Judy have been sweethearts since the third grade.  As a young boy, Charley’s church primary teacher, Margie, sometimes took the weekday class children to the neighborhood ponds to catch Bull Frogs.  Margie took the children home, dressed the frogs, and fried up the plump frog legs.

Charley’s great-grandfather Charlie was the father of nine sons.  They hitched horses to the family wagon early in the morning and hunted about 15 miles from Erda to South Mountain, then 15 miles back, filling the wagon with Jack Rabbits and ducks.  At the end of each hunt, they dressed their catch and hauled it to the train station, from where it was shipped to the Salt Lake markets.  Rabbits and Mallard ducks each brought $1.50 a dozen, while the lesser ducks brought only $1.00 a dozen (Blue-wing Teal, Green-wing Teal, Gladwell, Norweigian, Bal Paint).

Joe and Charley both told me proudly that Erda, the name of Rabbit Lane’s home town since 1880, means the good earth in German.  I respected their love for their roots, but secretly wondered if the German word erda didn’t translate simply to dirt.  My admiration for these men has caused me to reflect that the quality of a community’s soil is comprised not only of the ingredients of its dirt, but is enriched by the labor, the sacrifice, the contributions, and the love of the people that work the soil and raise their crops and rear their families.  So, even if erda means simply dirt, or whether Erda hearkens back to the name of the Anglo-Saxon earth goddess, I believe that Charley and Joe are right.  Erda is in fact the earth that surrounds and sustains and nurtures: the good earth. 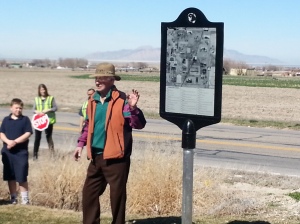 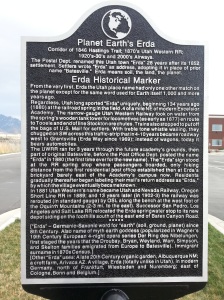