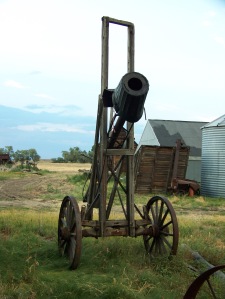 –If I say I’ll never do something, I never will.–

The country was not quiet, not like we all thought it would be.  Cows mooed, horses neighed, chickens clucked, dogs barked and howled, cats fought, chasing each other around the house, pea cocks called mournfully, and roosters cock-a-doodle-dooed.  I had always thought that roosters crowed at sunrise, waking the farmers for their morning chores.  But I discovered that the roosters in Erda crow all night long.

About a week after we moved into the country house, another noise began, a horrible grinding, vibrating noise.  I liked the cool air wafting through my windows at night, but I had to shut them, and use ear plugs, to find enough relief from this new noise that I could sleep.

I complained to Angie about the mysterious noise the next morning.  None of us could guess what it was or where it was coming from.  We only knew that we hated it, especially me.  It sounded like the noise was coming from right outside my bedroom window.

I kept looking out of the window into the darkness, trying to see what was making that dreadful noise.  Three days later I announced, “I know what it is,” then sat quietly until the children all asked several times, “What?  What?”

“It’s a water pump,” I answered.  “There’s a well over there in the corner of the alfalfa field behind our house, and the farmer runs the gasoline-engine pump so he can water the alfalfa with his line of sprinklers.”

“What makes me mad,” I continued complaining, “is that he runs it all night long instead of all day long.  Why can’t he run it during the day instead of keeping everybody up at night?”

I called a neighbor farmer, Cordale, and asked as politely as I could why the pump ran all night, and couldn’t farmers water during the day?

“Thank you, I was just wondering,” the children heard me say a few minutes later, and I hung up the phone with my ears burning with embarrassment.

The mad was all gone out of me.

“At least he said the pump wouldn’t run all summer,” I sighed, “just a few weeks at a time as they move the sprinklers across the field.  Then they’ll let the alfalfa grow up and cut it.”

For weeks the pump droned on at night until running out of gas in the early mornings.  When I thought things couldn’t get any worse, the pump stopped working correctly: the noise would begin to soar upward and then dip down, over and over again for hours until the pump ran out of gas.  It sounded like a sick cow mooing forever into a microphone.  On and on it ground away, sliding up, sliding down.  Oh, how it annoyed me as I jammed in my ear plugs and covered my head with pillows.  The rest of the family just got used to it.

The country, I learned, can be anything but quiet.