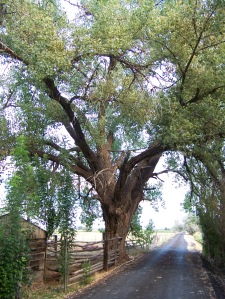 Sleepily down Church Road I walked, past an unmarked dirt lane traveled most often by farmers on tractors.  Somehow I had tumbled out of bed and out the door.  I would much rather have continued my slumber under warm covers.  Crisp darkness and the ripe fragrance of dew upon cut hay greeted me as I stepped onto the covered porch.  I could see only silhouettes in the lingering darkness: old trees planted by farmers perhaps a century ago; the Oquirrh mountain range; cattle chewing mechanically on coarse grass.

I blamed my wife.  It was because of her that I began to walk on Rabbit Lane.

“I intend to live a long, full life, and I want you to live it with me,” she confronted me where I lay on the bed staring despondently to the south through the big window, over fields of tall, brown grass.  “I’m afraid that if you don’t change something, you won’t be there with me, and I don’t want to be alone in my old age.”

Early the next morning I arose, quietly, so as not to awaken her, not out of consideration so much as pride, out of not wanting her to know that she had motivated me to escape the perpetual pull of sleep, to move beyond my miserable comfort.  As yet I was unwilling to confess it.

I walked toward the highway, the dog baying at my back, begging me to take him along.  No, Tank.  This is for me.  Sensing my resolve, he set to a mournful howling, like a lonely wolf under a full moon.  I shuddered at the neighbors’ unheard curses.

Directly above the entrance to an unremarkable dirt road, leaves suddenly rustled high in a Cottonwood tree, as if from the sharp release of a branch pulled back taut.  I looked quickly up to see the gray shape of a great owl flying powerfully with wide, deep wing beats, but making no sound at all in its flight.  It screeched suddenly, high and hoarse, as if to say, How ignorantly you interrupt my repose!  The owl flew eastward toward the mountains, behind which a faint pink light steadily grew in anticipation of sunrise.

My encounter with the owl felt personal, even miraculous, as if a gentle reward from some nature-spirit pleased that I had summoned the strength to venture forth into her marvelous but fleeting realm of early morning stillness.

The soft lowing of cattle began to give way to an irksome highway hum that grew to a buzz, and, as I approached the intersection, to a morning rush-hour roar that pressed against me as if it were the gale of a howling hurricane.  Reaching the highway, I turned and recoiled as the force of the terrific noise pushed me away, back to the interior of the farmland.  This hurried human commotion had quickly usurped the magical peace of my meeting the owl, had compelled me to reverse course and walk toward home, my back to the noisy artery.  I determined never to approach the intersection on foot again.

Half-a-mile from the highway, I began to hear again the faint sounds of water trickling idly through an irrigation ditch.  In the new light of morning, a muskrat splashed its startling alarm and dove to streak back to its burrow in the bank.  Here, at the ditch, begins Rabbit Lane, a narrow dirt road that follows the natural terrain between farms.  Rabbit Lane marks the county’s zero longitude line on the Salt Lake Base and Meridian survey system: everything east is east; everything west is west.  Ancient cottonwood trees form a shaded canopy where the road begins, like the shrouded entrance to a magical green world.  The irrigation ditch, overgrown with Cattail reeds, Watercress, and Russian Olive trees, follows along one side of the lane.  Pink-blossomed Milkweed lines the road edges where the county grader has pushed up a slight berm.  Repelled by the memory of the highway’s howl, I turned north onto the hard-packed dirt, and found myself forever changed.

Roger Evans Baker is the author of Rabbit Lane: Memoir of a Country Road.  The non-fiction book is available in print and for Kindle at Amazon.  Rose Gluck Reviews recently reviewed Rabbit Lane in Words and Pictures.