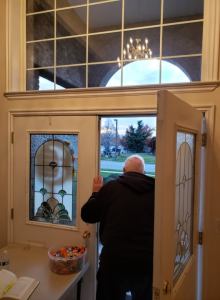 With Halloween falling on a Sunday, the local festivities played out mostly on Saturday. Mom and Dad had bought bags of candy—the good stuff, like Hershey and Nestle and Mars—and brought a card table up from the basement.  Dad bivouacked at the card table by the front door, poised to answer the Big Ben doorbell chime.  He greeted each costumed trick-or-treater with a hardy “Hello!” laughing with surprise and delight at the little children in costume.  “You look so great!” he cheered as he held out the bowl.  The children reached into the bowl and offered polite Thank Yous, and the parents waved and said, “Hello Nelson!  So good to see you!”  Starting at 4:00 p.m., Dad sat waiting by the door, reading his book, yellow highlighter at the ready.  Each time he rose to open the door took longer than the time before.  Seeing he had reached his limit, I relieved him at 7:30 to enjoy his dinner with Mom.  When the doorbell rang, I opened the door and cheered, “You look so great!” as I held out the candy bowl.  Each child took one candy, until one older child asked bluntly, “How many?”  “One is good,” I answered, “but two is better.”  Mom called from her recliner, “Give them each a handful!”

My daughter and her husband, characters from the movie Up, giving balloons to children at the neighborhood “trunk-or-treat” in Houston, Texas.

2 thoughts on “Courage at Twilight: Waiting at the Door”