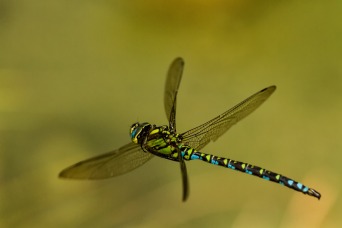 This was his modus operandi:

arriving at a mountain lake and settling the family with picnic baskets and chairs and tackle boxes and poles, our father walked the perimeter, heading off on a trail if there was a trail, through bushes and over-and-around tree trunks if there wasn’t, to scout the best fishing and to gather perspective of lake and forest and meadow and bog and picnicking family from every vantage point to find what he could find.  He looked small on the opposite shore, but his piercing fingerless whistle raced over the water to cheer hello my family! everything is wonderful and beautiful isn’t it!  He rounded and returned and told us what he had seen and led us to where the water was deepest and darkest to cast our sinkers and worms.

A large dragonfly sports 30,000 hexagonal eyes – ommatidia – each taking its own picture, thirty thousand pictures, that the insect’s miraculous miniscule brain assembles into a single image.

Six miles to the lake.  Boys with hot white Eisenhower blisters.  Men sprawled on rocky soil with backpacks for pillows.  More than one of them moaning.  We’ll camp here the leader rasps.

Dragonflies claim the Greek name Anisoptera: thou of uneven wing or something close. Their hindwings stretch wider and deeper than their forewings.  Those wings emerge withered and   wet and vibrations too fast to see pump haemolymph dragon blood into the veins and the wings stretch and dry into glossy precision.

Tents pupped, I set off to walk the perimeter of Governor Dern, to see lake and forest and mountain and lily pond and collapsed footsore boys from every vantage point and to find what I could find, and what I found at the end of the lake was a lush meadowy grassy patch under aspen shade, and I sat and shed constraining boots and breathed deeply in and deeply out and sensed the living beauty of that space and the miracle of being allowed to slip quietly in.

For 325 million years their mouth flaps have snapped out and snatched winged prey and pulled it into toothy jaws all while rushing around on clear-foil wings.

Mosquitos descended upon me in a gray fog of tiny whimpering whines, a crowding chorus that landed and pierced and sucked as I slapped and spat and swore.  And then they arrived, a choregraphed cluster of dragonflies, diminutive Blackhawks hovering in three-dimensional formation, studying for mere seconds then commencing a coordinated attack, each launching toward me like a pulsing piston and pulling as abruptly back and lunging again and withdrawing, dozens of them darting in and out and making clean kills with every sortie, forward and back out.  The swarm began to melt and ooze before this synchronized onslaught of dragons.  Dragons with wings an invisible blur of inconceivable speed.  Dragons with supreme sight.

And the cloud lifted and
drifted off and away, my helicopter
heroes in pursuit, and I sat mute
and stunned and pricked and piqued and
utterly astonished
at the world.

(Image by Detroitius from Pixabay)