–There is no sweeter sound than raindrops on the rooftop.–

I love birdhouses and birdfeeders.  Probably because I love birds.  Their often sweet, sometimes cacophonic, twittering and chirping brings me happiness.  Providing them with an endless supply of seeds brings me happiness.  They gather at the feeders on my grape trellis by the hundreds: House Finch, House Sparrow, Pine Siskin, Redwing Blackbird, Mourning Dove, and on occasion some less-often-seen species like Brown Cow Bird, Indigo Bunting, Black-headed Grossbeak, Bullock’s Oriole, and Towhee.  One common sparrow shares the same general markings as its hundred cousins, but appears to be an albino morf, nearly white.  The Western Meadowlark, Western King Bird, and American Robin sing, fly, and hop around nearby, but don’t come to the trellis, being insect and worm eaters.

But beyond the birds, I enjoy the sight of the little wooden birdhouses mounted on the beams of my grape trellis.  I call it a grape trellis not because it grows grape vines, but because I built it for grape vines and wish it grew grape vines.  For reasons peculiar to the Erda soil, or to my cultivation of that soil, grapes have never grown up my grape trellis, though I have tried many times with several varieties.  After ten years of false starts, the only thing growing on my grape trellis is bird houses.  Each of my children has assembled one or more birdhouses and attached them to the trellis.

I decided one year to make large bird houses and mount them on poles throughout the yard.  Not content to purchase plastic models from Wal-Mart, and unwilling to pay for more expensive wooden models, I resolved to construct my own.  I drew out several designs that departed from the standard models.  In other words, no squares or rectangles, but unusual trapezoids and even a circle.  I constructed interior frames on the workbench in my shed, then attached gray, weather-worn siding harvested from discarded pallets.  No master woodworker, I awkwardly attached the siding to the frame, and the roof to the house.  Before attaching the roof, I drilled a hole in a bottom frame cross member, inserted a 4-inch-long bolt-head screw, and with a ratchet secured the house frame to the post.

The posts came in various forms from several places.  We found one while on a drive by Black Rock, on the shore of the Great Salt Lake.  The post had washed up on the rocks, worn smooth by years of buffeting by wind, sand, and salt water.  (The salt content of water in the Great Salt Lake exceeds 25%, while the oceans average about 5%.)  We tied the post to the top of our car and brought it home.  Another was an old cedar fence post I found lying broken and discarded in a ditch by the side of the road.  Four-by-four lumber also makes excellent posts.  I made a post for each of my four birdhouse models, cementing three of the posts in a cluster in the bird house garden, with the fourth nearby behind the picket fence.  The fence runs 40 feet from the grape trellis along the garden border to the birdhouse garden.  I made the pickets from old pallets, too.  I seem never interested in building the same thing twice, and built only one of each birdhouse model.  But seeing them each morning on their tall posts as I begin and end my walks on Rabbit Lane brings to me a simple satisfaction.  I would be happier were they inhabited by more birds and fewer yellow jackets. 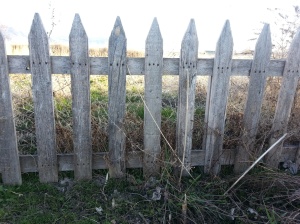